Bisiach employed many of the finest makers of the time, such as Ricardo and Romeo Antoniazzi, Andrea, Giacomo, Leandro Jr. and Carlo Bisiach, Gaetano Sgarabotto, Giuseppe Ornati, Ferdinando Garimberti, and Igino Sderci, whose instruments were made and repaired alongside a flourishing trade in antique instruments. The maintenance of an extremely high level of quality and sophistication was no small achievement in the context of 19th century Italy, which was normally marked by small artisan workshops that employed only a few makers working in relative ignorance of the range of possibilities in their craft. The Bisiach workshop influenced generations of future Italian violin makers and became an important point of reference for the whole of Italian violin making during the 20th century. 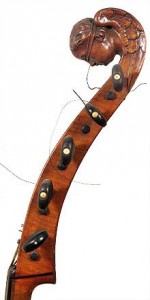 This interesting historical piece, made in 1915, is probably a Bisiach invention despite its “old instrument” look. The closest relative is the viola d’amore, a multi-stringed musical instrument with a set of strings that are sounded by drawing a bow across them and another set of strings located below the fingerboard that are not played directly but vibrate in sympathy with the bowed notes. The sympathetic strings enhance the beauty of the sound, giving the viola d’amore a warm and sweet resonance that was popular during the Baroque period. Leopold Mozart said that the viola d’amore sounded “especially charming in the stillness of the evening.”

This instrument displays many of the same characteristics as the viola d’amore. In addition to having the sympathetic strings, it is constructed with a flat back and an intricately carved head, and is unfretted. However, its size (the back measures about 30.5 inches) is more in line with a cello’s, whereas the viola d’amore is held under the chin like a violin, so we could call this a cello d’amore. It is a fine example of the high technical level that was achieved in the Bisiach atelier. The workmanship is neat and precise. The highly detailed carving of the head is especially beautiful, and the sound holes display both technical skill and aesthetic sensibilities rooted in classical style. The fine untouched original varnish is covered by nearly 100 years of accumulated dirt that has never been cleaned, so the instrument displays an attractive and completely undisturbed patina.

The original case contains a trade card that states:

The word “brevettati” translates to “patented” which would seem to indicate that Bisiach obtained a patent for the idea. It appears that he endevoured to make quartets of d’amore instruments. Two other similar instruments are in the Museum of Musical Instruments in the Castello Sforzesco in Milan. The existence of such inventive instruments invites us to compare Leandro Bisiach to J.B. Vuillaume, who in addition to being an important maker and running a highly successful business was also a tireless inventor. Vuillaume produced unusual instruments such as the octobass and the contralto, as well as a highly functional steel bow, a self-rehairing bow, and many other inventions.

Like Vuillaume’s octobass and contralto, the cello d’amore has not had any lasting impact on the musical world, but it takes it’s place as an interesting historical piece nonetheless: a fascinating relic from the imagination of one of the great masters of 20th century violin making. This instrument was brought to the United States from Italy in 1915 by the family from whom we were fortunate enough to acquire it. We are pleased to have this handsome and interesting cello d’amore on display in our shop.