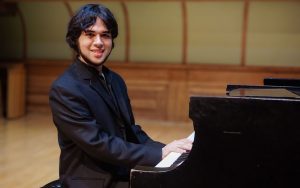 Past performance highlights include recitals at important concert venues in Mexico, such as the Fine Arts Palace, Hidalgo Concert Hall of Colima, Teatro Ocampo in Morelos, Blas Galindo Concert hall, and the Cultural Center “Roberto Cantoral.” His budding performance career has also brought him to American cities including Dallas, Chicago, and New York.

Born in Mexico City in 1993, Mr. Suaste began his studies at the age of 14 at the “Centro Morelense de las Artes” under the tutelage of professor Alejandro Vigo. Subsequent piano studies included working with Anatoly Zatin and Vlada Vassilieva (PETROF DUO) at the University of Colima, and with Gustavo Rivero Weber (a student of Jorge Bolet at the Curtis Institute of music) in Mexico City.

He has performed in master classes for celebrity artists including Lang Lang, Boris Berman, Jean Dubé, Pavlina Dokovska, Eva Maria Zuk, and Martin Katz, among others.

Mr. Suaste is an undergraduate piano performance major at the Chicago College of Performing Arts at Roosevelt University, studying with Jorge Federico Osorio.