Darnton & Hersh provides full services to care for and repair your instrument, whether it’s a student violin or a valuable professional tool. Everything from basic repairs such as gluing open seams and dressing fingerboards to complex restorations is done in our shop. However, there are many things you can do yourself to help maintain your instrument in good condition and sounding its best. Violin maker and restorer Michael Darnton provides instrument care guidelines for players below:

With careful handling, a violin can easily survive for hundreds of years. Instruments made in the 1500s are still being used as everyday tools by working musicians, with no end to their usefulness currently in sight. The most basic point of violin care is to protect the instrument from damage by keeping it out of danger at all times. This means storing it in its case when it’s not being played, even during breaks or when you are alone and assume you’ll be careful. It also means treating the case as carefully as you would treat the unprotected violin; while the case does provide some protection, it’s not uncommon to see damage that was sustained while an instrument was in its case.

Cleaning is a simple procedure if it’s done after every use. A simple wipe with a soft cloth to remove anything foreign, especially rosin and fingerprints, from the entire instrument, including the fingerboard and strings, is sufficient. If this is always done before the violin is put in its case and the cloth itself is cleaned regularly, hardly any maintenance on the finish will be required.

I’m not enthusiastic at all about violin polishes, even the “good” ones. They contain solvents that work by lightly attacking foreign substances and then, eventually, the violin’s own varnish. They leave their own residues in the form of oils and waxes, which can attract dirt. If used excessively, they actually work their way into the wood and can frustrate future repairs (oil and wax reject glue) and cause tonal changes. In addition to the daily cleanup, I prefer that owners simply use a damp (not wet) paper towel occasionally to remove skin acids and other water soluble substances, followed by a gently drying with a dry paper towel. This small amount of water does no harm if it is immediately removed. A bit of additional gentle buffing of the surface with the drying towel imparts a pleasant shine that looks more natural than the one imparted by commercial polishes.

It is extremely important for players to constantly monitor the bridge to make sure it remains straight and properly positioned. The normal position for the bridge is directly between the inner nicks of the f-holes, centered between them so that the bridge is centered on the path of the fingerboard. Check this by looking first down one side of the board and then down the other, noticing how the bridge lines up compared to the two sides. Since the position of the bridge can affect the tone of the instrument, sometimes a slightly different location is needed, and often a maker will place tiny pin pricks in the varnish on either side of the bridge to use as indicators of its proper position. They will usually be very small and hard to see, appearing almost as tiny accidents. If there are no marks and a professional adjustment has resulted in an unconventional location for the bridge, note the proper spot relative to landmarks in the varnish and wood, and make sure the bridge stays where it was set. With some instruments, one f-hole and its nicks is slightly higher on the instrument than the other; if this is the case, the bridge should be set perpendicular to the center line of the instrument, not on an imaginary line from one f-hole nick to the other. 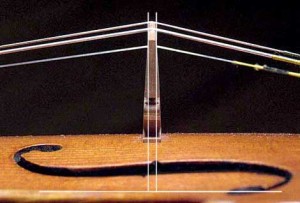 There’s one more thing that can happen to a bridge. Strings do wear out and if a winding is damaged, it can saw its way deeply into the bridge or the nut very quickly. Of course, by this time the sound quality of the string has long since deteriorated. Bad strings cannot always be detected by their appearance, so regular replacement (as often as every month for an active player) is a must. One of the easiest and most magical adjustments that many violins can get is a new set of strings, and this is an adjustment you can easily do at home.

Properly fit pegs shouldn’t cause many problems. If your violin is hard to tune and the pegs stick and jump back and forth past the note as you tune, first try applying a stick lubricant (which can be purchased at any violin shop). Simply remove one string and the associated peg, apply a small amount of the lubricant to the shiny rings on the peg where it fits into the pegbox, replace the peg and give it a few spins. Restring and tune that string, then loosen another and work on its peg, until you’ve done all four. Sometimes the peg will slip a bit for a day or so, but then will usually stiffen up to normal as the lubricant soaks in. It shouldn’t be necessary to press the pegs hard into their holes to make them stick; too much pressure can damage the pegbox. If pegs are too slippery, chalk, applied the same as the peg dope, will help them stick. There’s a perfect point between the slip of the peg dope and the stick of the chalk where everything works just right, and that’s the point you want to find.

The proper way to wind strings onto their pegs is something many violinists don’t stop to think about. First, feed the string through the hole in the peg with just a couple of millimeters hanging out the back, then wind the peg one or two turns in the “wrong” direction—towards the tip of the peg. Finally, cross the string back over itself to hold the loose end in place, and wind the remaining turns towards the head of the peg until the string almost touches the pegbox wall.

That’s about the limit of what a player can do at home. Beyond the things I’ve mentioned above, you should constantly watch for developing problems, as I’ll next describe them.

Every single case I’ve seen of a new violin tonally “dying” in the first year has been a case of normal and necessary adjustments having been ignored and left undone. Some violins are stable from the start and need nothing done to them, even after their initial break-in period, but every violin, new or old, should have yearly checkups to make sure that no problems have developed. Of course, if a player notices something wrong, such as the strings being too high over the lower end of the fingerboard, or an open seam, that should be attended to immediately rather than waiting for the next annual checkup.

Open seams, no matter how small the opening, are particularly detrimental to the tone of an instrument. They are common and innocent, and are the violin’s way to relieve stresses without breaking the wood. However, open seams should be glued as soon as they’re noticed. If they are in structurally important areas and allowed to remain for a long time, whole sections of the violin can move or collapse, resulting in a much more extensive repair.

Cracks, too, should be repaired as soon as they are observed. Not only can the pressure of the strings (75 pounds along the length of a violin, with 25 pounds of downward pressure at the bridge!) cause small cracks to quickly become large ones, but also any dirt or oils (and especially polish) that get into a fresh crack make it much more difficult to glue and much more visible after the repair. If a crack develops, the best strategy is to immediately loosen the strings until the crack can be fixed.

Excessive string height is a symptom of something gone awry, and should be taken as a sign that a checkup is needed.

Scratches and varnish wear are generally not cause for alarm. Though it’s painful to be the one to make the first scratch, wear is inevitable. On older violins, a network of innumerable tiny marks is part of the patina that owners find so charming. One easy way to reduce the impact of scratches is to darken them. The “do-it-yourself” method is to moisten a fingertip, pick up a bit of dust off the top of a door, and rub it into the nick. This really works, and is the inelegant version of what a shop would do using commercially available materials. Retouching such spots with a similarly colored varnish, or adding a bit of color just at that spot is one way to deal with the problem but although it looks fine in the short term, it eventually shows up as an isolated island of color. This fix, although tempting, should therefore be avoided.

Although it’s technically possible to make a varnish that is extremely durable and lasts almost forever, durability is not a quality of the finest varnishes of the best old violins. Most of the colored varnish on many fine Cremonese violins is now missing, and many experts believe it was lost in the first few decades of the instruments’ lives. Even today such varnish remains chippy and fragile. Though there was an intervening period through the industrial eras of the 1800s and 1900s when tough varnishes were considered desirable, it’s also long been recognized that violins with these varnishes are often inferior in tone. Consequently, some modern makers work to achieve a varnish with the same vulnerability as that on the original models that they follow. Consider yourself lucky if your violin has such an accurately-compounded and vulnerable varnish!

Usually this type of varnish will appear to corrode and turn to a bit of a mess, and then rub entirely off. The first place this happens is often on the heel of the neck and the rib to the left of it, where the player’s hand touches in the higher positions. On the rib, in particular, your shop can install a plastic tape as protection if this begins to happen and it bothers you. Most of the rest of the violin will age more gracefully, and more slowly. Normally, the resulting bare wood is not a concern—it will not shorten the life of the violin—ibut if you are bothered by it, or if your perspiration is particularly corrosive (some are!) a shop can seal this area with a more durable coat. Worn edges around the perimeter of the body and other similar places will lose their varnish rapidly, but much less obviously. Try to think of this as part of the charm of an aging violin. Take the opportunity, if it presents itself, of looking carefully at any truly antique violins you might see, and imagine how your own instrument will look in 300 years!