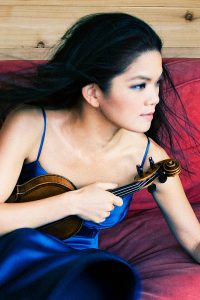 Violinist Janet Sung enjoys an acclaimed international career as a virtuoso soloist, recognized for her intense, exhilarating performances, and by her signature lustrous, burnished tone. Hailed by The Washington Post for her “riveting” playing and “exquisite tone”, her playing possesses the rare blend of fierce intelligence, subtlety and brilliant virtuosity.Since her orchestral debut with the Pittsburgh Symphony at age 9, she has performed with leading orchestras worldwide. Recent seasons has seen her as soloist with, among others, the Buffalo Philharmonic Orchestra, South Korea’s Pusan Philharmonic Orchestra, Germany’s Stelzen Festival Orchestra, Russia’s Omsk Philharmonic Orchestra and National Symphonic Orchestra of Bashkortostan, the Aspen Festival Chamber Symphony and the Pro Arte Chamber Orchestra of Boston, as well as the orchestras of Boise, Bozeman, Corpus Christi, Delaware, Dubuque, Fargo-Moorhead, Hartford, Las Cruces, Springfield (Massachusetts and Ohio), Tacoma and Wyoming. This season, she will make her debut with the Goettinger Symphonie Orchester in Germany.

An artist of remarkable versatility, Ms. Sung is celebrated for her compelling performances of traditional works from Bach to Berg, and is passionate about promoting works of the 20th and 21st centuries. In recent years, she has performed repertoire as diverse as Henri Dutilleux’s Violin Concerto, L’Arbes des Songes, to Astor Piazzolla’s Cuatro Estaciones Porteñas. In 2009, Ms. Sung presented the world premiere of Kenneth Fuchs’ American Rhapsody for Violin and Orchestra, and in 2011 the world premiere of Augusta Read Thomas’ Double Helix, which was recently released on Nimbus Records. In upcoming seasons, she will present the world premieres of Kenneth Hesketh’s Inscription/Transformation for violin and orchestra in Germany and a new Violin Concerto by Augusta Read Thomas. Additionally, she has toured throughout the United States with fiddler Mark O’Connor’s American String Celebration, showcased in performances of Vivaldi’s The Four Seasons, Sarasate’s Zigeunerweisen, and original compositions by O’Connor.

Her solo performances have frequently been aired on radio and television, nationally and internationally, including multiple broadcasts of her performance of Korngold’s Violin Concerto on NPR’s “Performance Today,” and regular featured performances on Chicago’s Classical WFMT. She is featured on recordings of Vivaldi’s The Four Seasons and Bach’s Brandenburg Concerto No. 1, the latter with members of the Gewandhaus Orchestra recorded at the Thomaskirche in Leipzig, Germany. Her latest recording project includes the complete works by J.S. Bach for Violin and Keyboard with pianist and Bach specialist, Sean Duggan.

Janet Sung was chosen by Leonard Slatkin as the recipient of the Passamaneck Award, for which she performed at Pittsburgh’s Carnegie Hall for the Y Music Society Concert Series.

Born in New York City, Janet Sung began her violin studies at age seven, making her public debut the following year. At age nine, she began a decade of private studies with renowned violinist and pedagogue Josef Gingold, a period that overlapped with her attendance at Harvard University. She graduated with honors earning a double degree in anthropology and music, a reflection of her inquisitive passion and curiosity. Ms. Sung was subsequently invited to study on full scholarship with Dorothy DeLay at The Juilliard School. Other influential teachers include Masao Kawasaki, David Cerone, Eugene Phillips and the Juilliard String Quartet.

Currently Head of Strings and Associate Professor of Violin at the DePaul University School of Music in Chicago, Ms. Sung is a highly sought after artist-teacher and regularly conducts master classes at conservatories throughout the U.S. and abroad. She also serves as associate faculty at The Juilliard School (initially as the Starling/DeLay Fellow). During the 2003-2004 season, she was invited as the Clifton Visiting Artist at Harvard University for the “Learning from Performers” program, whose previous guests included Isaac Stern, James Galway, Mark Morris and Quincy Jones. 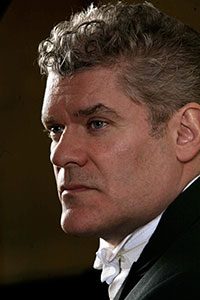 American pianist William Wolfram was a silver medalist at both the William Kapell and the Naumburg International Piano Competitions and a bronze medalist at the prestigious Tchaikovsky Piano Competition in Moscow. Wolfram has appeared with many of the greatest orchestras of the world and has developed a special reputation as the rare concerto soloist who is also equally versatile and adept as a recitalist, accompanist and chamber musician. In all of these genres, he is highly sought after for his special focus on the music of Franz Liszt and Beethoven and is a special champion for the music of modernist 20th century American composers.

An enthusiastic supporter of new music, he has collaborated with and performed music by composers such as Aaron Jay Kernis, Kenneth Frazelle, Marc Andre Dalbavie, Kenji Bunch, and Paul Chihara. His world premiere performance of the Chihara re-orchestration of Chopin’s Piano Concerto No. 1, with the Milwaukee Symphony under the baton of Andreas Delfs, was met with great critical attention and acclaim. Other highlights include several chamber music collaborations, including recitals and recordings with Oscar Shumsky, recitals with Harvey Shapiro and numerous collaborations with Leonard Rose.

Wolfram has extensive experience in the recording studio. He has recorded four titles on the Naxos label in his series of Franz Liszt Opera Transcriptions and two other chamber music titles for Naxos with violinist Philippe Quint (music of Miklos Rosza and John Corigliano). Also for Naxos he has recorded the music of Earl Kim with piano and orchestra – the RTE National Symphony Orchestra of Ireland behind him. For the Albany label, he recorded the piano concertos of Edward Collins with Marin Alsop and the Royal Scottish National Orchestra.

As educator and teacher, Mr Wolfram is a long-standing member of the piano faculty of the Eastern Music Festival in North Carolina, and a regular featured guest at the Colorado College Music Festival in Colorado Springs, Colorado. He also teaches a performance class at the acclaimed Manhattan School of Music.In print and other media Wolfram was the focus of a full chapter in Joseph Horowitz’s book, The Ivory Trade: Music and the Business of Music at the Van Cliburn International Piano Competition. On television, he was a featured pianist in the documentary of the 1986 Tchaikovsky International Piano Competition.

A graduate of The Juilliard School and a Yamaha artist, William Wolfram resides in New York City with his wife and two daughters.